This sign, place by the Henrico County Tea Party, stands on highway 156 north between I64 and I295 in eastern Henrico County, Virginia: 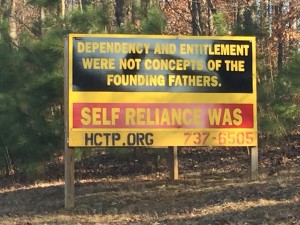 In case you cannot read the text, it says “Dependence and entitlement were not concepts of the Founding Fathers.  Self reliance was.”

Except maybe not.  Prominent Virginia Founders like Washington and Jefferson owned slaves.  These men did not rely on their own ingenuity and hard work to make themselves successful in life.  They relied instead on the hard work – and reproduction – of the human beings they held in human chattel slavery.  These men did not start businesses or farms, employ others, and make a profit.  They purchased – or mostly inherited –  human beings and then worked them almost literally to death so they could live a comfortable life.

Thomas Jefferson wrote that “…a child raised every 2. years is of more profit than the crop of the best laboring man.”  He relied not on his own ingenuity and hard work but on breeding human beings like livestock.¹

Washington and Jefferson, along with the other men who signed the Declaration of Independence and wrote the Constitution, indeed began a bold experiment in republican government – at least for the time.  And I expect they believed in the virtues of hard work.  But many of these men, including all of them from Virginia, did not rely on their own selves.  They relied on, and built their wealth on, the backs of human beings who worked as slaves in labor camps.

This site uses Akismet to reduce spam. Learn how your comment data is processed.